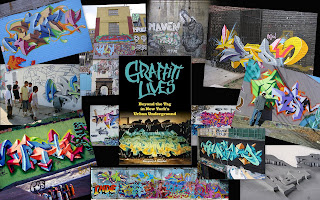 Last night in NYC it was snowing huge, white, soft snowflakes.  It was magical.  I was wandering around Soho and I loved it.

Anyways getting to the point of the blog, after walking around for a bit, I went into the bookstore/cafe, McNally Jackson, browsed through some books, got some delicious tea and made myself comfortable.  I came to hear a presentation/discussion by an author, Gregory J. Snyder.  In his new book, Graffiti Lives, he talks about graffiti culture, it's history and it's future and how it is viewed.  Some of the points he made are: graffiti is an art form; we shouldn't stereotype the writers;  just because people do graffiti doesn't mean they are criminals; and it doesn't necessarily lead to more crime.  He also had facts to show that just because there is more graffiti in an area doesn’t mean the crime rate is going to be worse.  For example, Soho has major graffiti but not that much crime and he compared that to a neighborhood in Brooklyn with far more crime and much less graffiti.  Snyder then went on to show that many graffiti writers go on to find successful careers in art, design, publishing, mural-painting, etc.

Although Snyder is not a writer himself, he has studied graffiti for over 10 years.  His friend KEZAM, a well known graffiti writer and professional, was also there to discuss graffiti writing and give us the inside scoop.   He has been writing since 1989 so is a pioneer of sorts in the subculture of the graffiti world.  KEZAM only does legal graffiti nowadays, but I'm sure he probably still knows what's going down on the street.

It was really cool to hear about and interesting to discuss graffiti.  I even learned some graffiti lingo, like the difference between a tag, a piece and a throwie.  I especially enjoyed it because it was a small intimate group and I got a chance to meet and talk to both the author and graffiti writer.    I will definitely be noticing the graffiti around the city more.

I love living in New York.  There are things like this going on every day in the city.  I feel so lucky! 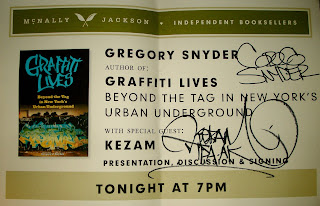 (They signed this poster for me!)
To see more awesome pieces done by Kezam go to www.flickr.com/photos/kezam
Oh and one more thing, apparently they did a podcast of last night, so if I find it I will post it.
Posted by melange muse at 10:49 PM

It sounds soooo exciting there! I am incredibly jealous. You are the luckiest!