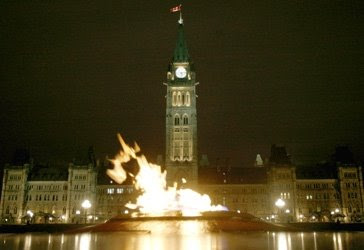 Have you been hearing about the Canadian coalition crisis?  Probably not, unless you live in Canada or follow world news.  Anyways it is kind of a big deal.

Here is a little background, basically the opposition parties, The Liberals, New Democrats and Bloc Quebecois have joined forces and want to take over the minority conservative government because they are saying that the government is failing to tackle Canada's economic problems.  So they want to kick our current Prime Minister, Stephen Harper, to the curb less than 2 months after the election.

So what happens next?  This morning Stephen Harper and our Governor General, Michaelle Jean had a meeting, where she granted Harpers’s request to suspend Parliament until late next month.  This means that the Tories are safe from a takeover until January 26th when the parliament resumes.  The first order of business of course will be the federal budget.

What do the opposition parties have to say about this?  Apparently they are "more committed than ever to the coaliton"

One blogger wrote "it's time for the majority of Canadians to get together by uniting the best of the old Liberal and Conservative parties and getting rid of the bad. This means a shift in power. Those currently leading and running the back rooms of both parties will need to leave to allow a fresh start." Forming a Liberal-Conservative coalition would be taking it to the extreme, but at least the two parties, which aren't able to form a majority on their own, need to work together for the sake of Canada.

I couldn’t agree more, but it seems like it may be a no win situation for all parties and Canadians.  Destabilizing the government will do nothing to calm foreign investors and will only worsen the Canadian economy, which is still doing much better then the American economy anyways.

If only Stephen Harper could have been a little smarter by working better with the opposition parties.   I think he could have had several months of cooperation by reaching out in a non-paritsan way like Obama is doing.  The situation is not going to be fixed by Stephane Dion, the leader of the Liberal party, taking over. How are three opposing parties supposed to merge together and have a unified leadership?

This whole thing just doesn’t make much sense.  I thought I was Canadian and enjoyed democracy and had a vote that counted?

One more thing I wanted to add.  I think it is weird how all this political craziness is going on in Canada and I live in New York and hear little about it.  Nobody's talking about it, it isn’t a big story on the news, it doesn’t really seem to be making headlines here or anything.  If the same thing were going on in the United States it would be a huge deal and make headlines all over the world.  No doubt my fellow Canadians would be talking about it and know all the details on the situation.  It is interesting.  Who decided the U.S got to be the center of the universe?

At least the situation has been reported in the U.K., China, Australia, Switzerland, the Netherlands, world press organizations like AP and Reuters and it actually has been picked up in the U.S. by organizations like Bloomberg and the Wall Street Journal.  Still it is likely that most Americans don’t care since it doesn't affect them. Although, investors are watching and it could harm the Canadian economy if the government doesn’t start functioning better, which in turn would affect the American economy.

Well, I guess all we can do is wait to see how things play out, since it doesn’t seem to matter what we Canadians think...

I do care what you think though!  So please share your thoughts!

Excellent...you've captured the essence of what is happening. Love the title of this post and the picture is perfect!

center of the universe is right. i'm in Boise, and i hadn't heard anything about our huge crisis until Amy mentioned it to me. stupid stupid stupid.

This has been interesting to follow.
The whole situation has been great for canadian journalism, right? I don't think Mcleans and candian blogs have had this much traffic in awhile (because nothing usually happens here!)

The idea of a coalition government is a bit shocking, yet the fact that the opposition parties are able to legally do this is comforting in a way. I am not for the coalition, but respect that their move actually proves our system to be completely democratic and functioning well.

Harper has a minority goverment, which means he NEEDS the confidence of the commons. It makes perfect sense that if the majority of the commons (opposition parties) don't trust him... they can group together and kick him out! It sucks for us that support Harper, but we could be grateful for that same right later down the road when we have some crazy liberal PM that needs the boot.
We'll see what happens end of January when parliment is back